Several swords were prominent during Feudal Japan and these are generally known as Japanese swords (日本刀) or nihontō. The kanji used to write Japanese sword(s) include ‘日’ the ideograph for sun, and ‘本’ the kanji for ‘origin’ or ‘root’ (this symbol is a pictorial graphic of a tree with a root at its base indicated by the small cross horizontal line at the bottom of the kanji). These two kanji (日本) are combined to represent Japan (origin of the sun). The third kanji (刀) represents sword: thus all together we have Japanese sword(s). The Japanese do not distinguish between plural and singular nouns.

Most Japanese swords are not well-defined and categories for length of the weapon are general. The lengths were measured in shaku (the average distance between nodes of a mature bamboo stem ~ 1 foot). The primary shaku used to measure most objects in Japan equals 30.3 cm (11.93 inches).

A general length classification scheme used for nihontō:
In addition to the above swords, the naginata and yari were considered to be part of the nihontō family even though they were pole mounted blades.

The most common sword known to Westerners is katana (刀). The katana is a single edged sword, with a curve blade whose possession was restricted to the samurai lineage during Feudal Japan. It was thought that katana were the soul of samurai and was so important that the samurai actually gave names to their swords, as they were considered to be part of the living.

Long Swords
(1) ōdachi (also known as ōtachi) (大太刀)
The ‘ō’ in ōdachi refers to ‘great’. The kanji for ‘great’ is written as ‘大’ which also means big. The ōdachi predated katana and had some unique characteristics. Not only was the sword noticeably long, the ōdachi was marked by religious inscriptions imprinted on the tang. It is thought by most researchers that ōdachi were used in ceremonies prior to battle; and because their length (5 to 6 shaku) was enormous (often longer than the samurai was tall), it is thought many were used as cavalry swords. The ōdachi would have been impractical to carry in an obi (belt) around one’s waist. Thus, it was thought the weapon was either carried on one’s back, in hand, attached to a horse, or by an assistant who followed the samurai.

(2) Nodachi
The nodachi is often confused with ōdachi. However, nodachi refers to any type of long battlefield or field sword (daitō) as well as a tachi and is often misapplied to any over sized Japanese sword. It has the same appearance and design as a tachi, but was significantly longer. The sword is believed to have been used primarily for dueling.

Daitō
(3) Katana (刀).
The katana (pronounced kah-ta-nah in Japanese and popularized as ka-tan-a in the West), was one of the traditional swords worn by samurai. It had a blade larger than 2 shaku with a more moderate curve than a similar blade known as tachi (see #4 below). The katana was worn on the left side of the samurai with the cutting edge (yaiba or ha) up. The blade included a circular to square guard (tsuba) separating it from a long grip handle or pommel (tuska) made for two hands. The blade of the katana along with the portion of the blade known as the nakago that extends into the handle was all one continuous piece known as the tang. Those katana made for combat (shinken) and training (iaitō) have full tang. This simply means that the nakago and ken (blade) are made of one, uninterrupted, piece of steel. Many cheap practice (iaitō) unfortunately have two separate pieces - a blade and handle. This results in loosening of the blade with prolong use until the handle starts to separate from the blade. Thus, when searching for an iaitō it is best to pay a few extra bucks and purchase one with a full tang. If you decide to purchase one to train in any of our dojo, it must be an iaitō with dull edge. Shinken are way too dangerous for dojo use and in Arizona should be reserved for trimming cactus.

The grip handle of katana is typically covered with ray skin leather (same’) and wrapped with cord known as ito. To hold the handle (tsuka) in place on the nakago, a hole was punched into the steel nakago and a small bamboo peg (mekugi) forced through the handle into the nakago. When the handle is removed from a well-made katana by forcing the mekugi out, the swordsmith’s signature should be seen carved into the nakago. The katana was developed from an earlier sword referred to as uchigatana (打刀). The katana was carried in a scabbard known as the saya.


(4) Tachi (太刀). The katana and tachi look very similar but can be distinguished by locating the mei (signature) on the sword’s nakago under the handle. When worn, the mei would be carved on that side of the tang that would face outward when placed in one’s obi. Because the tachi is worn with the cutting edge down opposite of the katana, the mei will be on the opposite side of the tang for this sword. The tachi was often considered as a spare blade used in battle.

There were tachi with variations from the classical weapon that included a larger tachi (see #1 above) known as ōtachi (ōdachi) and a shorter sword known as kōtachi (kōdachi). The kōdachi was similar in length to wakizashi (see #5 below).

Shōtō (short swords)
(5) Wakizashi (脇差)
The wakizashi, also referred to as wakizashi no kataka, translates as ‘sword inserted at one’s side’. The wakizashi typically had a blade of 1 to 2 shaku. Those closer to the length of a katana, were referred to as ō-wakazashi, while a shorter blade wakizashi was closer to the length of a tanto and known as ko-wakizashi. The wakizashi was worn with a katana only by samurai. Together, the pair were referred to as daisho which translates as ‘dai’ (big) and ‘sho’ (little), terms some of us are already familiar with because some of our advanced karate kata use these terms, such as Passai Dai and Passai Sho.


The wakizashi was a back-up sword, also used for close quarters fighting and for seppuku (ritual suicide). The size of wakizashi was not regulated until the Edo Period when in 1638 AD, only samurai were allowed to wear katana of a regulated length. At this time wakizashi were also regulated. Samurai were allowed to wear both swords while those of the chonin class (merchants) were only allowed to wear a shorter ko-wakizashi to protect themselves from bandits. It was customary for samurai to leave katana at a door of a castle, but they always carried wakizashi. The wakizashi was the samurai’s honor blade and would never leave his/hers side, so much so, that it is reported samurai even slept with them under their pillows.


Tanto (knife)
(6) Tanto
The tanto was a knife worn by samurai of feudal Japan. One variety was that of the yoroi tōshi or dagger (about 8 inches long) that had a greater thickness and used for piercing armor. Another tanto was the aikuchi (匕首). The aikuchi had the distinctive characteristic of no tsuba, similar to another dagger known as a kaiken. See also ken tanto below (#8). Even so, many tanto had tsuba, such as the tanto given to me by the Utah Shorin Kai at the last Gassuku (see photo to right of tanto with shaku measuring tape).

Miscellaneous
(7) Chokutō.
The chokutō had a straight blade and was introduced to Japan from Korea.

(8) Kusanagi no Tsurugi
This was a double-edged sword used in the 5th century in Japan and similar to the ken tanto (double-edged knife).

(9) Shirasaya (白鞘)
Shirasaya translates as ‘white scabbard’. This was a sword that had a plain wooded blade mount consisting of a saya (scabbard) with a tsuka (hilt) and traditionally used for storage when a sword blade was not needed for some time. In this form, it was not used on a battlefield.

(10) Shikomi-zue (仕込み杖)
The shikomi-zue is a sword-stick. These typically contained a blade inside a cane (tsue) mounting for concealment. Some of these also concealed other weapons such as pepper powder (metsubuski), chains, hooks, etc.

Schools (dojo) and Styles (ryu)
Most Japanese swords are traced to one of five provinces in Japan that included Shoshu, Yamato, Bizen, Yamashiro and Mino. There were different styles and systems of Japanese swordsmanship and training.

Kenjutsu, Kendo
Kenjutsu (sword techniques) is the martial art combat sword training. Similar to kenjutsu is kendo (way of the sword). Both tend focus on techniques of the sword after it has been drawn from the saya (scabbard). Kendo-ka practice with bamboo swords known as shinai, while wearing padded clothing known as bōgu and head gear known as men. Most kenjutsu use sword.

Iaijutsu (iaidō 居合道) and Battōjutsu (抜刀術)
Iaijutsu, iaidō and battōjutsu are fast draw arts designed to develop fast draw with follow-up attacks with the sword. These arts are similar and generally only differ in training methods. For instance, battōjutsu incorporates multiple cuts following the draw of the sword; while iaidō emphasizes reaction to unknown scenarios, or a reaction to a sudden and swift attacks. In iaidō, the student begins training with a bokken (wooden practice sword) and later switches to a iaitō (dull-edged practice sword). Only very experienced practitioners use shinken (live blade) because of the extreme danger to oneself. Because iaidō is practiced with a weapon, whether it is a dull or live, nearly all training is by kata that includes drawing the weapon followed by cuts and finishing with ceremonial de-blooding of the blade and replacing the weapon back into the saya. Sparring is not part of iaidō, but is instead restricted to kendo. Another art that is similar to iaidō, is that of jōjutsu (training with a 4-foot staff).

Sword testing, known as tameshigiri was designed to test the blade’s sharpness and the practitioner’s abilities to cut a variety of materials. Today, we often see cuts on matting or straw on a vertical pole. In the past, it was not uncommon for some Japanese to test on cadavers of executed criminals. Few iaidō schools practice tameshigiri.

Samurai arts are also part of Seiyo Shorin-Ryu Karate and Kobudo. In addition to iaido, our members train in jujutsu, hojojutsu, hanbojutsu, naginatajutsu and yarijutsu. 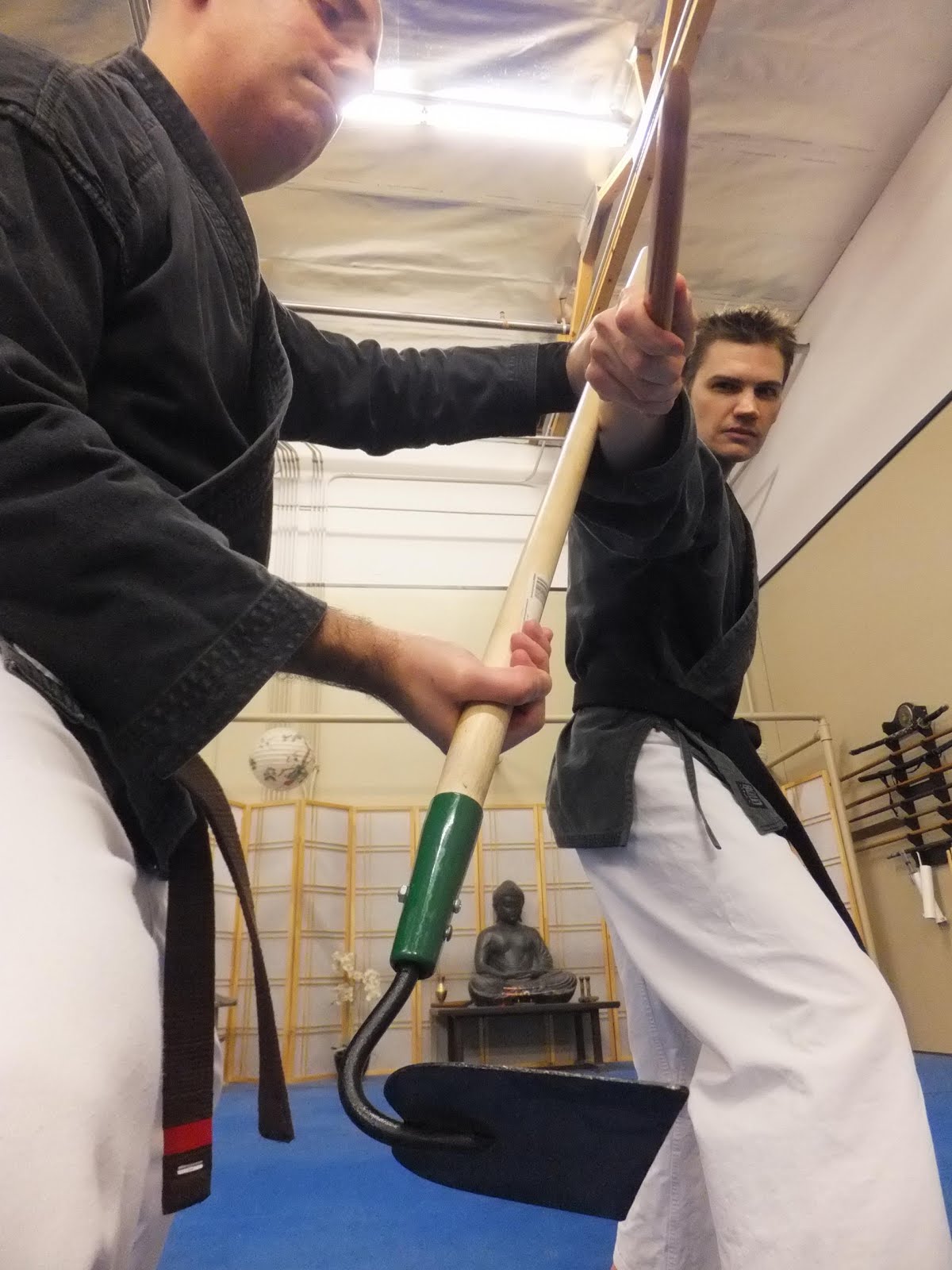 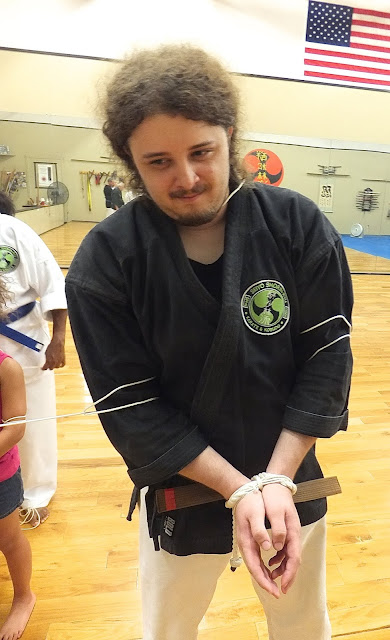